Ok, I believe the best way to judge if you understand certain circumstances is to write it down. How organized and prepared the sentences reflect your understanding level. So I decided to give shoot on what I am doing right now on research. Of course this is just preliminary.

When a gas or vapor is brought into contact with a solid, part of it is taken up by the solid. The molecules that dissappear from the gas either enter the inside of the solid, or remain on the outside attached to the surface. The former phenomenon is termed absorption (or dissolution). When the phenomena occur simultaneously, the process is termed sorption.

The solid that takes up the gas is called the adsorbent, and the gas or vapor taken up on the surface is called the adsorbate. It is not always easy to tell whether the gas is inside the solid or merely at the surface because most practical' absorbents are very porous bodies with large internal' surfaces. It is not possible to determine the surface areas of such materials by optical or electron microscopy because of the size and complexity of the pores and channels of the material. The gas adsorption itself, however, can be used to determine the accesible surface area of most absorbents.

The energetics of adsorption depend on the extent to which the available surface is covered with adsorbate molecules. This is because the adsorbates can interact with each other when they lie upon the surface (in general they would be expected to repel each other).

Several adsorption isotherms have proven useful in understanding the process of adsorption. The simplest isotherm is attributed to a pioneer in the study of surface processes, Langmuir, and is called the Langmuir isotherm. If one assumes: 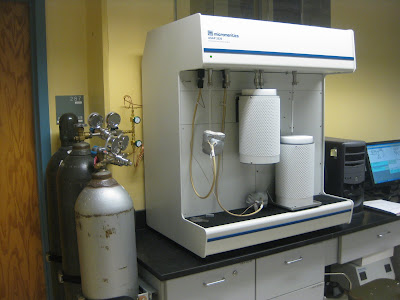 Compressed gases are required for analyses performed by the ASAP 2020 analyzer. Gas bottles or an outlet from a central source should be located near the analyzer. Appropriate two-stage regulators which have been leak-checked and specially cleaned are required. Pressure relief valves should be set to no more than 30 psig (200 kPag).