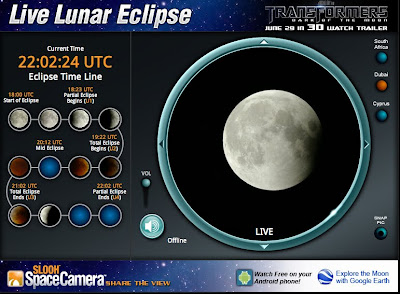 This is purely my opinion. I am not an astrophysicist nor planetary geophysicist. Can an eclipse change earth's gravity ? It depends, it boils down into which eclipse and scale you are talking. However, my notes below is open for discussion.

An eclipse is an astronomical event that happens when one astronomical object is temporarily obscured, either by passing into the shadow of other bodies or by getting other bodies pass between it and the viewer. The term eclipse is most often used to describe either a solar eclipse, when the Moon's shadow crosses the Earth's surface, or a lunar eclipse, when the Moon moves into the shadow of Earth.

Unfortunately, I never heard/read historical daily data on Earth's gravity, because (once again : only my opinion) this is only a function of the Earth's size and mass, both of which are not changing significantly over time. There is only one regular change of the gravitational acceleration over time at a fixed location, and that has to do with the reason for the tides. 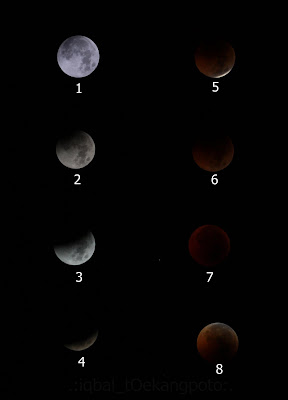 Countdown to the total lunar eclipse as seen in Yogyakarta, Indonesia. Permission and credit goes to mas Iqbal Taftazani.

I thought lunar eclipse is basically the same as Moon's phase except the orbital planes of each body do not line up in the same 3D cartesian position (it is not only about how in line horizontally or vertically they are). Thus eclipse does not appear every night.

The influence of the Moon's gravity upon the Earth is the primary source of our ocean tides (local gravitational changes). Newton had found that the attractive force of an object is inversely proportional to the square of the distance between the objects. The Moon's gravitational attraction is stronger on the side of the Earth nearest to the Moon and weaker on the opposite side. Since the Earth, and particularly the oceans, is not perfectly rigid it is stretched out along the line toward. For regional scale, I am not sure if Moon's gravity will distract Earth's gravity that much. Since gravity is vector, I would assume it acts as direction dependent unit.

So, does lunar eclipse disturb the Earth's gravity? I would say not really (for regional scale) or definitely yes (the reason for the tides).

Different story shares different logic. The first sign that gravity fluctuates during an eclipse was in 1954. French economist and physicist Maurice Allais noticed erratic behaviour in a swinging pendulum when an eclipse passed over Paris. Pendulums typically swing back and forth as a result of gravity and the rotation of the Earth. At the start of the eclipse, however, the pendulum's swing direction shifted violently suggesting a sudden change in gravitational pull. 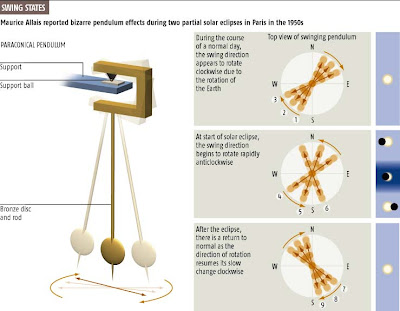 In 1999, scientists in France experimented pendulum which were set up in many countries, with some in the path of the eclipse and others not. Some of the early results are interesting. Video cameras taped the pendulum movements before, during and after the solar eclipse. Although no change was viewed in the pendulums outside of the eclipse path, two different sites in Europe revealed exciting results. These researchers, which were inside the path of the eclipse, discovered a change in the pendulum's path. If the results are correct, then another mystery was just created. Why would gravity change only in the areas under the eclipse' path? The data's still mystery and needs to be analyzed. However the results have had stumped the scientific game.

Almost ten years later, Geophysicist in China prepared an unprecedented array of highly sensitive instruments at six sites across the country to take gravity readings during the total eclipse due to pass over southern China. Chinese researchers have prepared eight gravimeters and two pendulums spread across six monitoring sites. The team hopes that the vast distance between the sites (roughly 3000 kilometres (1864 miles) between the most easterly and westerly stations), as well as the number and diversity of instruments used, will eliminate the chance of instrument error or local atmospheric disturbances.

Of course, I would assume, there were lots of doubts regarding this super local experiment. Atmospheric changes in temperature or air pressure, people suddenly moving or not moving, or other sudden changes might be good reasons for doubting.

So, does solar eclipse disturb the Earth's gravity? I would go with YES !! And of course gravity is subject to relativity (as Einstein stated in his General Relativity Law) - everything is possible. As for the behavior of a pendulum or gravitimeter during a solar eclipse, we will soon see if this a red herring or not. I'm betting that our understanding of gravity and General Relativity survives this challenge. Of course, carefully run experiments are the ultimate authority here.