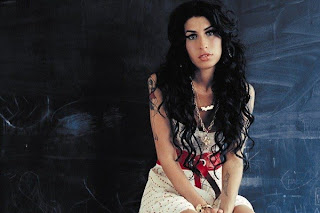 I was terribly shocked to hear the news :
According to The Daily Mail, singer Amy Winehouse has been found dead in her London home today (July 23). She was only 27 – the same age as Janis Joplin, Jimi Hendrix, Jim Morrison, Brian Jones and Kurt Cobain (yes - all of these are great vocalists / musicians) when they passed away. Winehouse had been battling drug addiction for years; it has yet to be confirmed if an overdose was the cause of her death (it makes me even sad). She was best known for her 2006 Grammy Award-winning album Back to Black, which featured the hit single Rehab.
Her talent will be missed. What I like about her is her authenticity of music. She wrote, recorded, and produced songs which captivate people with her powerful contralto voices and her eclectic music of various music genres including RnB, jazz, and soul. Thank you for these tears. RIP, sweetheart. :'(