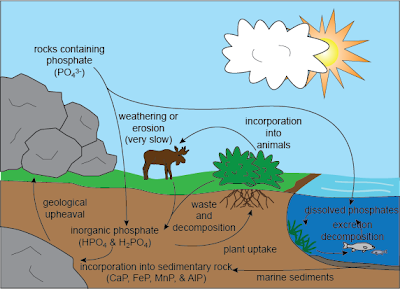 This dawn, I was quite flabbergast myself to read a sonnet written by one of the greatest geochemists ever lived, Mr Robert Garrels. It is ain't other Sumerian or Aristoteles' types of poems. It is neither John Keats' style of writing. He scribbled his poetry from geo-ish attitude, seeking a vulnerable pathway to articulate his profound anxiety of one thing: phosphorus cycle, something that I would never thought of lay it as fashion of literary art. Eminently an opulent manner of articulating the cycles of phosphorus of Earth.

Phosphorus itself is a rock-derived nutrient, meaning that its largest repository is in Earth's interior, where it is found in any types (igneous - sedimentary - metamorphic) of rocks. It is liberated from rock through chemical weathering and becomes available to terrestrial vegetation in soils. This nutrient is extremely important for photosynthesis. Some may assume that CO2 + H2O <=> 'CH2O' + O2 is as simple as it is. Well the fact is your plant won't do so-called photosynthesis if it doesn't have any HNO3 and H3PO4. Learn your basic, kids!